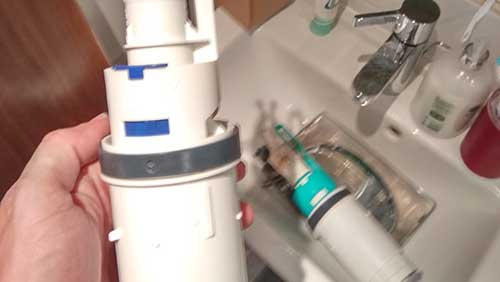 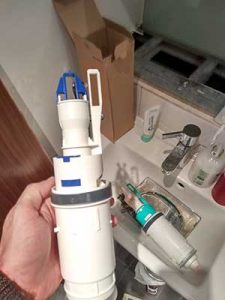 As a handyman/plumber, you will come across lots of different toilet systems that you need to repair. From basic ballcock valves and syphon replacements to concealed cisterns where you will in some cases need to disassemble the whole housing unit in order to get to it because the plumber/tiler who installed it never thought about “what if” it needs repairing at some point in the future.

In this article, we’ll show you how to replace a dual flush valve in Geberit UP200 concealed cisterns. These toilet cisterns are usually used in new build apartments and sourcing replacement parts for them can be a bit tricky. Your local Screwfix, Wickes, B&Q and Homebase stores won’t stock spare parts for them. You can always try your local plumbing merchants or get the parts online. If you are in or around Reading, Berkshire and need help with your toilet cistern then contact us. We provide minor plumbing services such as tap fixing and replacement, fix flush and intake valves and much more.

Tools needed for this job

Remove the flush buttons plate by sliding it to the right and pulling it away from the wall. There will be a metal spring wire on the left-hand side that holds it in place.

Remove 2 screws as shown in this picture and remove the holding plate. Try not lose the metal spring bit. If you do you won’t be able to secure the flush plate back in its place once you finish repairing your toilet cistern.

First, grab one of the screw holder tubes and rotate it anti-clockwise until it moves freely. Now pull it out just enough so that you can remove the backplate. You can see 2 clips on each side of the box that hold it in place. In most cases, you can just pull it out with your fingers and it will come out if not just use a flathead screwdriver to unclip them then pull it out.

Grab the flushing mechanism (see arrow) and lift it up slightly then pull the whole thing out. Now we have enough space to access the flush valve clips and remove it from the tank.

Step 5 (may not be necessary)

If it’s not obvious by now you will need to lift the top cover (usually a wooden decorative board or tiled board) and unscrew the top cover on your Geberit cistern and remove it.  Sometimes you won’t be able to remove the valve through the front hole without removing the inlet valve as well – even then it might be difficult. if you can remove the top cover just do it – it’s so much easier.

Now grab the black clips behind the flush valve with 2 fingers press them together to free the flush valve from the cistern clips and pull the unit out. That’s pretty much the end of it.

The silicon seal cost around £4 (Screwfix) whilst the new valve costs around £25. The valve in question is Geberit 240.638.00.1 Dual Flush Valve for UP200 Concealed Cistern Duofix Frame.

One last tip
Now that you have everything opened and fixed before putting everything back together consider adding a bottle of descaler to your tank and leaving it to work for 12h before flushing. This will descale the float and ensure that it can move freely up and down without getting stuck due to limescale buildup.